Hello everyone and a belated ‘Happy New Year’ to you all! Welcome to issue 66 as we head into our seventh year of SLAP publication.

I would usually at this point write with optimism as we look forward to the year ahead, but these are strange times folks and we’re living a very uncertain world. Global political instability and economic uncertainty are likely to make 2017 a tricky year for most of us.

That said, let’s at least look ahead at the positives locally... In this issue we bring you news of Hereford’s bid for City of Culture 2021. This initiative whether successful or not can only be a good thing, breathing new life and ideas into the area.

Talking of things Hereford, we say a fond farewell, for the time being at least, and a huge thank you to Naomi and Oli at Circuit Sweet who have been for many years good friends of SLAP, writing, distributing and generally supporting. Their duties in these areas will fall to the lovely people at Hereford’s Underground Revolution who are themselves doing great work promoting and supporting the local music scene.

We at SLAP are proud to support new local promoter Samantha Daly with her UnCover Indie club night. The first of which took place late January at the Marrs Bar. London indie upstarts Anteros were the headliners and so got our front page. See the review on page 18. Elsewhere in this issue we have our usual columnists such as Worcestershire poet laureate Suz Winspear, Paul White of Sound on Sound and the tireless Andy O’Hare. Don’t worry Andy, we’ve got virtual reality and artificial intelligence, it surely won’t be long before time travel is a possibility...

‘Tis a short month so it won’t be long before we’re back for more. In the meantime do yourself a favour, go to a gig, the theatre, an independent film or an exhibition and let’s support the arts and vibrant music scene around these parts! 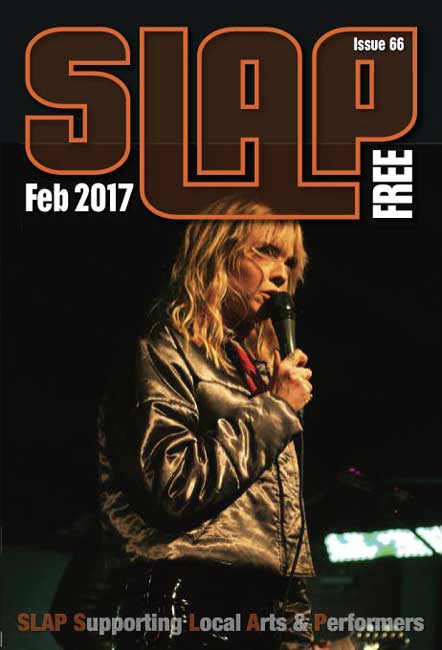