Let’s get the bad news out of the way first: it’s no April fool to find that The Session Worcester will be closed by the end of the month. Local business men and music lovers Al & Moz have put their heart and soul (and finances!) into this rehearsal space and all round musical hub for the last thirteen years, but rising costs, and a failure to be able to negotiate a level playing field for business rates, has led to the inevitable. While SLAP recognises that government backing for the arts is not necessarily a good thing, providing an environment for the creative industries to flourish certainly is.

Now to more positive matters. SLAP 79’s front cover features Nth Cave’s Danni and Fergus performing for Uncover’s International Women’s day at the Marr’s Bar – see the review on p21. While we’re on the subject of diversity we feature a smorgasbord of artistic endeavour across the region – from ‘The Ring’ arts project celebrating Worcestershire’s waterways to ‘Focus on Folk’ revelling in the sheer number of clubs popping up. Folk gets another fillip with a preview of Rustic Folk festival in Bewdley showcasing our very own former cover stars Doozer McDooze and The Humdrum Express among many others.

Poetry gets an airing with former laureates Heather Wastie and Suz Winspear featured and a preview of Evesham’s Festival of Words. Like folk, spoken word is having a renaissance at the moment and long may that continue.

This month’s interview is with Teddy Matthews who talks to Will Munn of Rhythm & Booze about the latest and forthcoming EPs, his fondness of the 90s and loving a good SLAP! Teddy has also got plenty of festival appearances lined up, and as the bills are honed we feature a plethora of outdoor entertainment events - Linton Festival, Mello Festival and Lechlade Festival to name but a few.

New for SLAP is a foray into Spotify. Granted, the revenue stream for up and coming bands leaves a lot to be desired but, for the fan, streaming services open up a whole new musical world. Enjoy.
Fool-ed (Again) 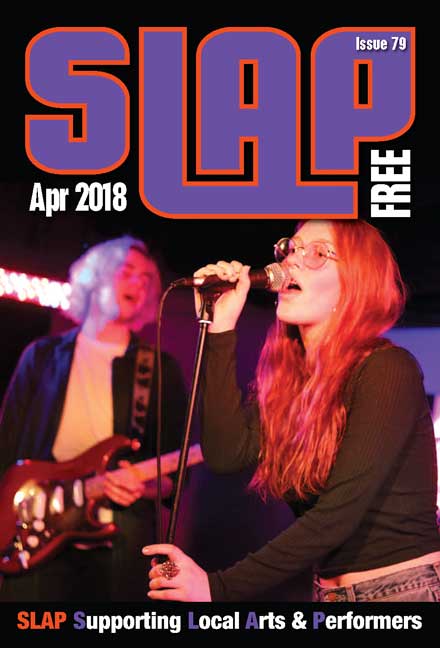