We did not want for issue 101 of SLAP Mag to be entered in to 'room 101'... But with the current situation regarding Coronavirus (Covid-19) that we all find ourselves in, we are aware that producing a print edition of SLAP mag for April 2020 is not viable. Our distribution points are mostly public spaces where people gather, the current advice by the government is to avoid these (without, by the way, any support for those industries, or those who support them).

It would be unfair on our advertisers, many of which are stockists of SLAP Mag, it wouldn't be fair on our delivers to distribute them, and that's if there's anyone around to pick up a copy to read. The likelihood is, judging by our inbox this morning, many venues, pubs and theatres will be forced to close without any of the protections of an enforced closure scenario.

We hope you and your loved ones are not too badly affected either by the virus or by the long term consequences of.
Best regards
Isolate-Ed x 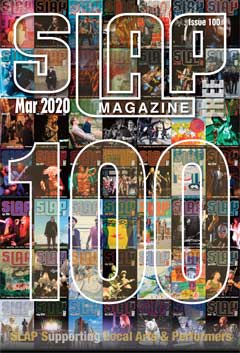 Well, here we are, one hundred not out! Who’d have thunk it?

When we published the first issue, we had no idea that almost a decade later we would still be going. Our first editorial started with... 'Thank you for picking up a copy of SLAP. Don’t worry, you haven’t stolen it, it’s FREE!' which still holds true to this day! The principle behind the idea of Supporting Local Arts & Performers has been and continues to be our ethos.

We owe so much to so many people who have supported us, written for us, distributed, advertised and generally kept us going over the years. Then of course there would be no artists or performers without venues, publicans, club owners, gallery directors and the many places that stock SLAP in and around the three counties. And of course you, the readers, we are grateful for your support which has kept us going when it would have been easier to give up. But we won’t be resting on our laurels, we want to continue, along with many other organisations, in our mission to assist the vibrant scene throughout the region.

To mark this milestone, we are holding a SLAP Mag - ‘Celebrating One Hundred Issues Party’, on the 7th March, at The Marrs Bar in Worcester. Put together in association with Uncover, we're excited to bring to you Arcadia Roots, Kick The Clown, The Connor Maher Quartet, White Noise Cinema and... ***Stop the Press!!*** Fights & Fires have also just confirmed! Andy O’Hare of BBC introducing will be the MC for the night and between acts we’ll be airing the Slap Spotify playlist of acts featured over the last couple of years. We are asking for just a £5 contribution on the door so come and party with us...

Slap Magazine is available to download as a PDF. You can also find free printed editions throughout Worcestershire, Herefordshire, Gloucestershire and Warwickshire.

Would you like to recieve a copy of Slap magazine delivered to your door every month? We now offer subscriptions allowing you to subscribe for one year. Each year consits of 11 printed copies, with a double issue for December / January.

When you subscribe your subscription will start with the current issue, and will be delivered by Royal Mail.

To purchase a years subscription for £40 to have Slap Magazine delivered to your UK address please pay with PayPal below.