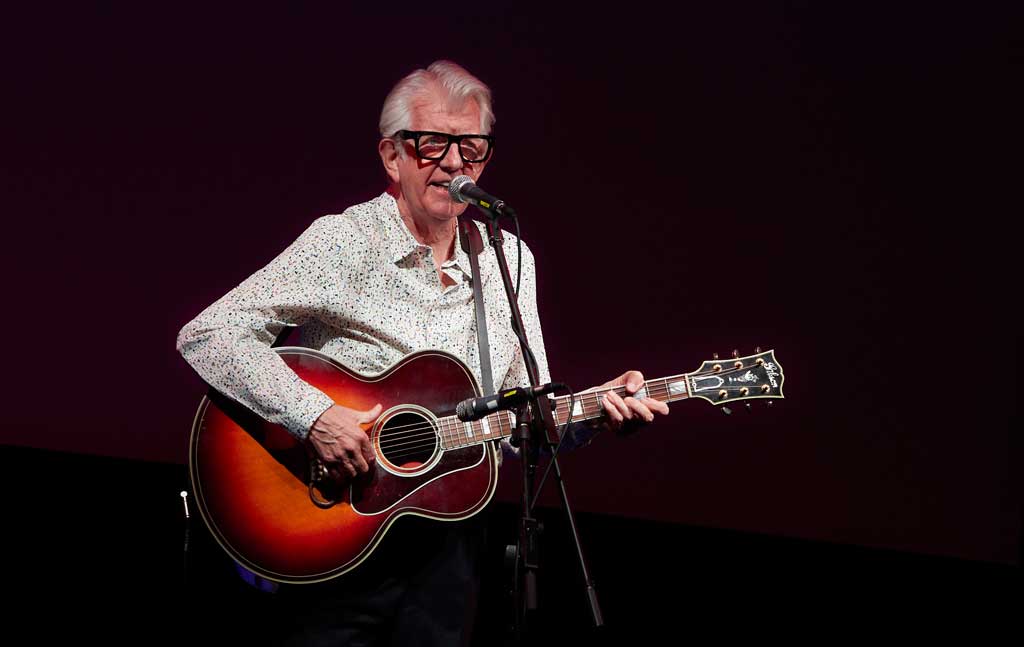 The accompanying blurb for Nick Lowe’s one man show proclaimed him as the “Headmaster of British rock.” Of course the elegant singer/songwriter, at the age of 73, has heard it all before?

Even if we had not heard of Tom Webber, we certainly sat up and paid attention to the burgeoning class of this enthusiastic student of music. The one man support act, at only 22, has clearly been influenced by Richard Hawley, Chris Issac, the Everly Brothers and of course Nick Lowe himself. The warmth of Webber’s melodious voice and his chords were a perfect starter; accordingly the self-penned songs were hewn from the educational experience of life itself. As we were always taught at school, write about what you know…

Knowingly, Nick Lowe made a dignified entrance and addressed his audience with an easy charm. Engagingly, our avuncular singer proceeded to give a lesson in stage-craft and easy conversation. Amusingly, even going as far as to thank us: “…for coming out and not staying home to eat chips in our pants.” Mentally we were taking notes…so this is how it’s done!

Can you remember the teacher, that teacher, whose voice would drone on and on until you switched off completely? Well conversely, mellifluous and sweet do not do justice to our Headmaster’s voice. Lowe clearly knows how to protect and work his vocal chords. Lowe’s singing voice this evening was astonishing. Furthermore, the sound system at the Sub-rooms as Lowe himself conceded was beyond complimentary.

And what is so funny, he didn’t have to ask for silence once! At peace the audience sat transfixed by the performance of a man in full control of his classroom.

Love is the only word to describe the sentiment which pervaded the room. With a canon of songs to lean on, Lowe leant in to the show with a determination to give a good account of his songs. Far Celestial Shore – written for Mavis Staples, who coincidentally is performing at The Subs in June – was duly given an appreciative response. The cover of Heartache went down like an unexpected “snow day”. “I knew the Bride…” encouraged his audience to sing along, sway their shoulders and nod in the way that those in the late summer of their youth allow.

Understanding his audience completely, the gentlemanly Nick Lowe, spoke about the history of his songs succinctly; revealed secrets of the stage, admitting it’s easier to hide behind a band and that one man shows are harder; he didn’t even take the encore as a God-given right, enquiring reassuringly “are you sure?”

Surely, the generosity of the performer, Nick Lowe was highlighted by his insistence he close his show with Alison by Elvis Costello. Beautiful.

As we sat in the car at the end of the night, fully clothed, enjoying our chips, all conversation focussed on the gig we had just experienced. I couldn’t help but think even a captious Ofsted inspector with the zeal of the self-righteous would have to class the night as “outstanding” –for ticking all the boxes – because it absolutely did!

By: The Swilgate Scuttler
Photography by: Jonathan Duckworth