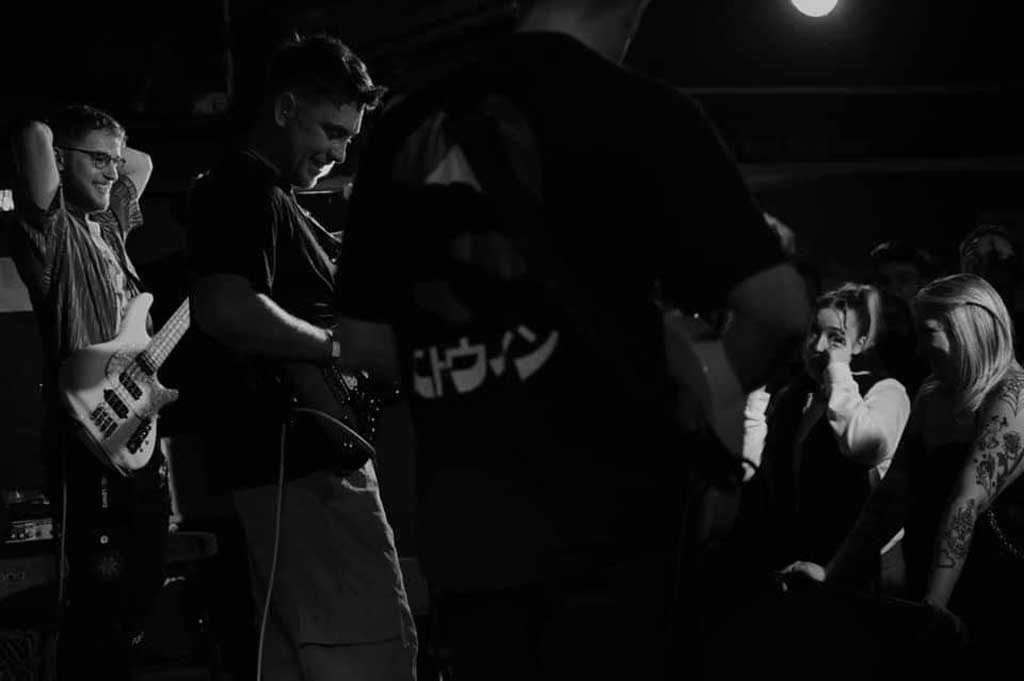 Word of Mouth by Colton Halls

Uncover Promotions decided to celebrate half a decade of showcasing the glut of talent that flows across the county of Worcestershire by doing exactly that. For two solid days they served up a relentless procession of new and existing acts. It’s an endeavour they deserve great kudos for so Slap! trotted along to the business end of Uncover’s Saturday all dayers at the Marrs Bar to check out two of Worcester’s finest, Skewwhiff and Word of Mouth.

Skewwhiff begin their set without fanfare or warning. The “here we are, let’s go!” kickstart makes it clear that this post-punk four piece outfit are here to let their music do the talking. That’s just fine though because those assembled in the room are eager to listen. Opener “Perfect Picture” is the perfect start and grabs immediate attention from the watchers.

Vocalist, Hannah Bean hip wiggles, shoulder shimmies, hops skips and jumps her way through her gig, flashing a series of enigmatic smiles and grins as she imparts the secrets of Skewwhiff’s world view to the enthralled watchers. She also has a way of delivering her lines in such a matter of fact manner, that it’s easy to feel as if she’s sitting us all down for a coffee and a catch up. It’s a gorgeously charming and engaging performance indeed. Guitarist Mark Hogan heaves his shoulders up and down emphatically showing the feel and insight he has into his craft or maybe he’s just shrugging at how brilliantly simple it is for him to demonstrate his band’s happy-go-lucky(ish) crowd pleasing material. Sam Griffin keeps himself to himself with barely a glance cast outwards toward those gathered. He swigs cider and thumps out steady basslines with no fuss and maximum effect. Maybe the two things are connected. If they are it’s no wonder he’s packaged it and is selling it under the flag of Skewwhiff because it all works flawlessly. Drummer Steve Glazzard is a laser, he never misses a single beat of his machine gun rhythm. He urges his bandmates on to greater heights and challenges them to go all the way – and they respond. It’s an exercise he repeats throughout the set but to no greater effect than during an intense rendition of “Rita”, that brings about the moment that band and watchers truly connect, plugged into each other inextricably for as long as this night lasts.

Everyone is given a moment to gather themselves during the sway along “Oh No” (breathe in and out everybody) before Skewwhiff freewheel us easily through the rest of their offerings closing things out with fan favourite “Gizmo”. Thrilling rides like this never last long enough but they do leave you exhilarated and optimistic. Just what the soul needs now and then so yeah, Skewwhiff by name, bang on by nature.

Indie rockers Word of Mouth make an equally understated beginning to their stint on tonight’s platform, launching headlong into opener “Pen Pusher”. Vocalist/guitarist Nick Medakovic pauses briefly to shepherd the already souped-up gathering into a front and centre adoring throng before delivering “Sad State of Affairs” with unconcealed gusto. Nick declares that the band may be a little rusty after a short stage absence and a lot sweaty in the high energy infused venue. Traditional wisdom tells us that rust never sleeps and WoM have no intention of resting on their opening laurels and up the ante with “Tightrope For High Hopes”. WoM are rolling and rolling fast, it’s fantastic and uplifting fayre for all those gathered who reciprocate with voluminous appreciation.

These clean cut, fresh faced likely lads from The Faithful City know exactly what they and their audience are about, their smiles and humour infect everything within a reachable radius and carry us all along with them. Nick and bassist Ethan Coyle bounce off each other superbly both musically and personally, guitarist Dan Medakovic is almost an onlooker to the Nick and Ethan dynamic, grinning throughout, safe in the knowledge that he can concentrate on delivering his exquisite lead riffs because “our kid” has a tight grip on the WoM wheel. Drummer Jake Powell remains stoic and steady, he doesn’t crack a smile and seems to take this drumming business very seriously indeed. That probably explains why he’s so damn good at it.

Roller-skate Princess is a particular high point and WoM bring the curtain down on an impressive feel good hour of tight, professional musicianship and stagecraft with “Turn The Other Cheek”. As they leave the floor to the rapturous appreciation of the watchers it’s easy to understand why Word of Mouth set tongues wagging wherever they go. Simply outstanding.